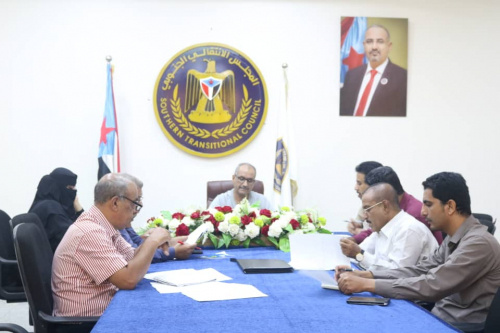 The meeting was attended by Mr. Mohammad Al-Ghaithi, Head of the General Directorate of Foreign Affairs of the Council, and Dr. Khaled Bamadhaf, Head of the Political Department, Dr. Mohammad Jaafar, Head of the Research and Studies Department, and Dr. Mohammad Basardah, Deputy Head of the Legal Department in the General Secretariat, and Mr. Ahmed Abdullah Al-Ahmadi, Director of the General Department  for Monitoring and Political Analysis in the Council, in which the Deputy Secretary-General stressed that the South-South dialogue is a step in the right path to reveal the true picture for inside and outside the country about those who have scattered the southern national cohesion and those who seek it, stressing the importance of supporting the vision of the Southern Dialogue team’s plan in an appropriate manner to ensure its success and reaching the outcomes related to the interest of the people of the south and their cause in restoring their fully sovereign state.

The meeting discussed proposals to support the vision of the Southern Dialogue Team’s work mechanism, which included the organizational steps, directions, core issues, stages and details of the dialogue, in addition to the objectives of the first phase of it and the criteria and determinants of the targets for participation in it, as well as its core issues based on the principle of reconciliation and tolerance and the common denominator among the participating parties. Represented in the restoration of the state of the South based on national responsibility and the rationale for the mission assigned to the Southern Dialogue Team.

The meeting reviewed a paper of proposals and observations submitted by the Center for Support and Decision Making regarding the vision of the Southern Dialogue plan, from the organizational and media side, stressing the importance of gaining acceptance from the participants from all parties to the dialogue in order to achieve southern consensus to reach the desired goals of the dialogue based on southern national unity.

The meeting agreed on the need for the concerned departments in the General Secretariat of the Presidency of the Council to prepare an action plan related to the specializations of each department to support the vision of the work of the Southern Dialogue Team to achieve the aspirations of the people of the South.