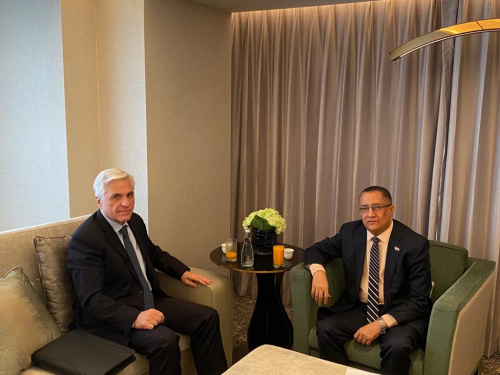 The member of the Presidency of the Southern Transitional Council, head of the Negotiations Affairs Unit and the delegation negotiating the implementation of the Riyadh Agreement, Dr. Nasser Al-Khobaji, received the Ambassador of the Russian Federation to Yemen, Mr. Vladimir Didushkin.

In the meeting, the head of the Council's negotiating delegation stressed the positions, policy and approach of the Southern Transitional Council, represented in adhering to the Riyadh Agreement and the need to complete the implementation of all its provisions without selectivity, with the need to take into account the priorities that require the return of the government to the capital, Aden, to carry out its tasks in alleviating the suffering of citizens, and sensing on their concerns and meeting their needs, and improving the economic and service situation as a top priority that requires action in light of the tragic humanitarian conditions.

Al-Khobaji praised the dedicated efforts made by the leadership of the Kingdom of Saudi Arabia to confront challenges and hostile risks, and to implement the Riyadh Agreement, to bring peace, support the economy, services, and development projects.

Al-Khobaji stressed the position of the Russian Federation and its pioneering roles in resolving the crises facing the region, referring to the historical relations that gather the South with Russia, and its contribution in the graduation of thousands of southern scientific cadres who today carry out major tasks and responsibilities in various fields, hoping that the next stage will witness more cooperation and joint coordination to serve common interests, peace and security in the region.

Al-Khobaji pointed out that the efforts today, under way to stop the war and start a comprehensive political process, still lack realism and seriousness, as some parties deliberately ignore pivotal issues that must be at the forefront of their attention, and at the top of which is the issue of the people of the South and their authorized mandate representative represented by the Southern Transitional Council, stressing in this regard, that the Transitional Council, despite its full support for all efforts aimed at stopping the war and addressing the intermittent crises in the South and Yemen, will not allow the passage of any political projects that go beyond the truth and reality of the aspirations of the people of the South and their national cause.

For his part, the Russian ambassador affirmed his country's full support for the efforts to implement the Riyadh Agreement, and to prepare for the comprehensive political process, which leads the negotiations to accommodating all issues and active actors on the ground.

The meeting was attended by Anis Al-Sharafi, member and rapporteur of the Negotiations Affairs Unit and the Council's delegation negotiating the implementation of the Riyadh Agreement, and Mr. Pavel Korlev, the attaché at the Russian Embassy.