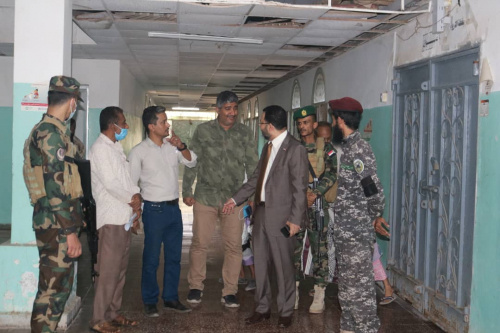 Al-Kaf and Haitham met, during the visit, with the director of the hospital, Dr. Khaled Al-Nahdi, and listened from him to a detailed explanation of the health, medical and treatment services provided by the hospital, as well as the difficulties and challenges facing the administration, especially the lack of medical and nursing staff, the lack of adequate nutrition for its guests, in addition to the frequent power blackouts affecting the hospital's workflow.

During the meeting, Al-Kaf stressed the Transitional Council’s keenness to improve the hospital and provide the necessary support and requirements so that it can carry out its humanitarian and therapeutic role in serving the citizens, praising at the same time the great efforts made by the administration and the medical and nursing staff for this category of citizens.

During the visit, Al-Kaf and Haitham toured the departments of the hospital, and got briefed on what it contains in terms of equipment and services provided to alleviate the suffering of patients, and how to take care of them by the medical staff working in the hospital.