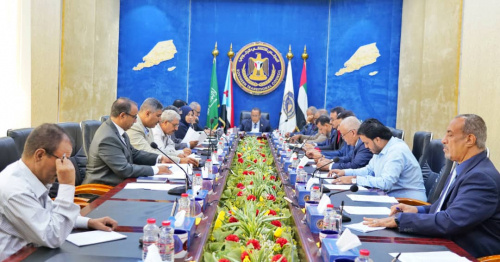 The Presidency of the Southern Transitional Council held its first periodic meeting for this week, headed by Dr. Nasser Al-Khobaji, Acting President of the Council, Head of the Negotiations Affairs Unit.

The meeting, which was attended by the cabinet ministers in the parity government, focused on developments and events in the national arena, foremost among which were the terrorist events, such as the cowardly assassination attempt of the member of the Presidency of the Transitional Council, Minister of Civil Service and Insurance Dr. Abdel Nasser Al-Wali, and the brutal attacks that targeted a number of security belt points in Ahwar, Al-Wadia, and Modiyah in Abyan governorate, in which led to a number of martyrs and wounded.

The Presidency mourned the martyrs who were killed in those incidents, and expressed its strong condemnation of these terrorist acts that are carried out in the occupied territories by the terrorist Brotherhood militia, stressing that it is not possible in any way to accept enabling terrorism against the sons of Abyan, Shabwa, and Hadramout Valley, or attempting to weaken the Security Belt leadership and other southern units.

The Presidency called on the Arab Coalition to investigate these criminal acts and take the necessary measures to uncover the perpetrators, stressing the need to complete investigations into the abuses that took place during the protests in the capital Aden and the vicinity of Al-Masheeq palace.

In its review of service developments in the capital, Aden and the south in general, the Presidency confirmed that the Council is making great efforts, with the government of parity, to ensure the stability of services during the holy month of Ramadan, and next summer.

With regard to security and military matters, the Presidency called on the government to urgently address the issues of the salaries of military individuals and civilians, and releasing the payments for security units in the capital, Aden, and the governorate of Lahj, and activate the role of southern cadres appointed by republican decisions in the Ministries of Interior and Defense.

The Presidency noted that what is happening from attempts to blackmail the leadership of the Special Forces represented by Major General Fadl Baash and withholding salaries for members of the Special Forces in the regions of Aden, Lahj and Abyan, and the corresponding support for leaders loyal to the Brotherhood working in the areas controlled by the terrorist Brotherhood militia, is part of this war, and a major blow to counter-terrorism efforts over the past years.

In this regard, the Presidency called on the Arab coalition countries and the international community to support the southern security services for repositioning and to continue their efforts to eradicate terrorism in the Muslim Brotherhood’s control areas of Abyan, Shabwa, and Hadramout valley.

The Presidency reaffirmed the need to stop the repression by the Brotherhood militia and its terrorist supporters against our people in Hadramout valley and Shabwa governorate, pointing out that these actions will not deter the south and its patient people from continuing the struggle to achieve its current and future goals.