Dr. Al-Khobaji informs Military and Security Committee about the progress in the negotiation process

Dr. Al-Khobaji informs Military and Security Committee about the progress in the negotiation process 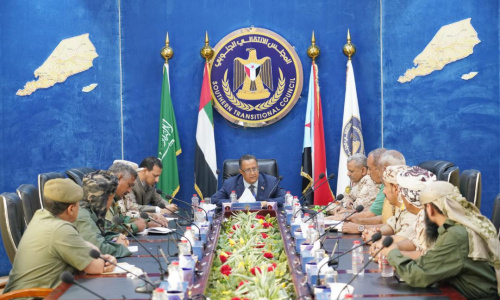 Al-Khobaji briefed the Military and Security Committee on the progress of the negotiation process of the Riyadh Agreement, reiterating the Southern Transitional Council's keenness to its political and military implementation.

Al-Khobaji listsened from the Head and members of the Military and Security Committee a detailed explanation of the field work and the obstacles that the other party puts in order to hinder the implementation.

The committee stressed the need to inform to the leadership of the coalition to intervene and stop the artificial obstacles and put pressure on the other party to stop them and obligate to complete the implementation of the remainder of its duties at this stage, in order to move to implement the other tasks, stressing the need to stop singularity in issuing decisions by one party that pose a threat to the success of the Agreement in general.

Dr. Al-Khobaji listened to what was presented by the military and security commanders, which focused on everyone's keenness for the success of the Riyadh Agreement, assuring them that the leadership of the Council is keen to implement the agreement with its two parts, and work with the coalition to make it successful.

The meeting also addressed many urgent issues, including the systematic escalation of the Houthi militia and the Brotherhood in Al-Dhalea, Tor Al-Baha, Karsh, and Shabwa, and ways to address them.