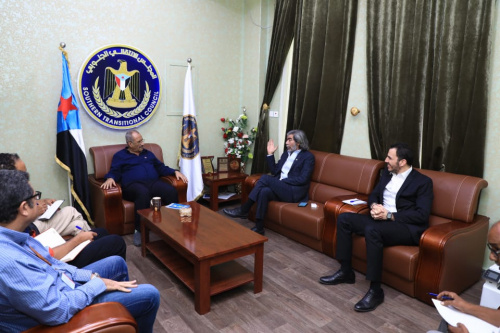 The Assistant Secretary-General of the Presidency of the Southern Transitional Council, Mr. Fadl Mohammad Al-Jaadi, received on Tuesday, at the headquarters of the General Secretariat in the capital, Aden, with Mr. Marwan Al-Ali, Director of the Office of the United Nations Envoy for Yemen Martin Griffiths.

Al-Jaadi affirmed that the leadership of the Transitional Council is keen on the success of the implementation of the Riyadh Agreement, indicating that the continued intransigence in implementing the agreement by the other party is what hinders progress in achieving it, and this is clearly evident through the military escalation and the movements of the Brotherhood militias affiliated with the Yemeni government in Abyan.

For his part, Marwan Al-Ali stressed the importance of implementing the Riyadh Agreement, and the need to quickly form the government, stressing that communication exists between the office of the international envoy and all parties.

Al-Ali pointed out that consultations are continuing to reach a final solution to the crisis and work to develop a comprehensive solution to stop the war.