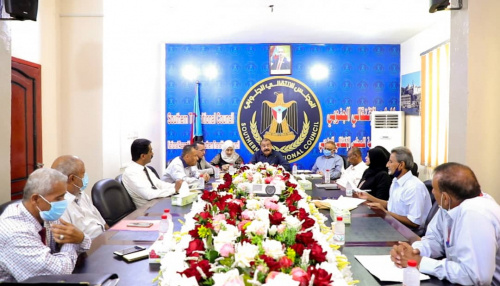 In the meeting, Major General Bin Brik presented a brief image of the work of the self-administration to save what can be saved of the state institutions and facilities to provide basic and necessary services to the citizens.

The head of the Self-Administration of the South said: “After our decision, which won the approval and blessing of everyone at home and abroad, the attention of the international community turned to us to monitor the victories and successes in the services side.” He emphasized that adherence to local revenues will achieve all the goals and solve all the stuck issues that the citizens have suffered from for years. "

Major General Bin Brik pointed out by saying: "We did our best to provide some requirements to the southern citizens, foremost of which is in the electricity. However, entering politics in all service areas made us make a decision not to compromise and strike with strong hand in order to achieve the most basic requirements of the people, through reserving the banknotes funds of the Central Bank and preventing speculation in the currency within it, besides we opened a specific account in the National Bank to supply local revenues to it in order to invest it for the benefit of the southern people and to improve the difficult standard of living that the people currently live in. ”

For his part, Dr. Abdul Salam Saleh Humaid, Chairman of the Supreme Economic Committee in the Transitional Council, thanked Major General Bin Brik for hosting this meeting, praising the wise decision taken by the Self-Administration Presidency to transfer local revenues from the Central Bank to the National Bank.