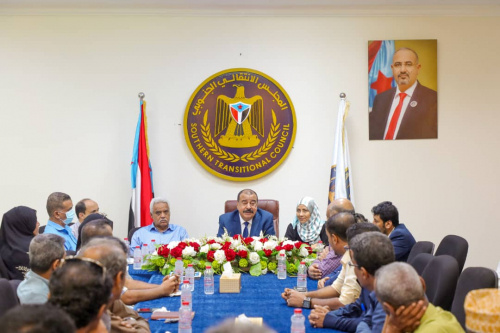 In the meeting, Maj. Gen. Bin Brik said: “As we are at the first stage, we in the self-administration addressed the implementation of four urgent issues mainly which are electricity, water health, and cleanliness, but the rain flood torrents revealed to us the weakness of the infrastructure of the capital Aden, which was systematically connected to this situation by the successive governments. ”

The head of the Self-Administration pointed out that the corruption file starts from the top of the pyramid in power and progresses to reach the smallest employee in the state, so this corruption had to be combated within the institutions and facilities through the work of supervisory committees that perform their oversight functions by engaging unions mainly to help us overcome this stage that we are going through. ”

Major General Bin Brik hoped that these committees would be at the level of responsibility in the face of the enemies of the South in all service, humanitarian and even military sectors.

For their part, the attendees expressed their happiness with this meeting, putting before the President of the self- administration a number of proposals and conceptions to develop the work of the self- administration, stressing on the need to create a systematic union work to uncover the extent of corruption within government institutions and facilities, and work in an organized legal and organized way to achieve the desired goal of restoring the South state.