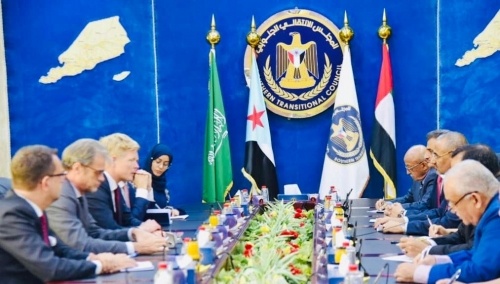 In the meeting, President Al-Zubaidi welcomed the European Union delegation, wishing them a happy and successful visit to the southern capital of Aden .

President Al-Zubaidi noted that their visit to Aden represents support for peace efforts and ending suffering and war, as well as support for the implementation of the Riyadh Agreement sponsored by the Kingdom of Saudi Arabia.

President Al-Zubaidi commended the European role and ambassadors in the field of humanitarian and development aids, especially in relation to the relief of the displaced, in addition to the efforts made in supporting the health sector and facing epidemics.

President Al-Zubaidi stressed on the role and efforts of the United Nations and its international envoy aimed at bringing peace to Yemen and involving the southerners in the final political process, stating that there is no solution to Yemen’s crises without resolving the issue of the people of the south.

For his part, Ambassador of the European Union Hans Gander Berg stressed that the European Union is keen to be an active partner for peace, especially with the Transitional Council, to provide security and stability in the region, as it focuses on the implementation of the terms of the first and second stages of the Riyadh Agreement.

The European official praised the positive handling of the Riyadh Agreement by the Transitional Council, and allowing the return of the Prime Minister, pointing to the desire of finding a mechanism and a common formula to support the development path in the liberated provinces with the Prime Minister to serve the implementation of the terms of the agreement and provide services to citizens.

In his turn, Mr. Nicholas Trophy, Ambassador of the Kingdom of Sweden to Yemen, expressed his happiness to visit the capital, Aden, expressing the readiness of the union to contribute to the peace process and end the war.