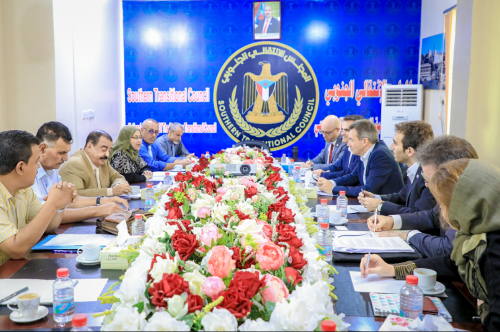 The chairman of the National Assembly, Acting President of the Southern Transitional Council, Maj. Gen. Ahmed Said bin Brik, met on Thursday at the National Assembly's headquarters in Aden, with Mr. Peter Maurer, Head of the International Committee of the Red Cross (ICRC) and his delegation.

The meeting reviewed the relief and humanitarian efforts of the International Committee of the Red Cross and its action plans for the next phase, and the issues related to the treatment of wounded and prisoners.

bin Brik praised the efforts of the Red Cross, stressing that there are ongoing meetings to discuss ways of joint cooperation between the Transitional Council and the ICRC.

Ben Brik stressed that the transitional council is in charge of fighting terrorism in the south, and it is in partnership with the Arab coalition countries led by Saudi Arabia, the UAE and the international community, assuring that the Transitional Council gathers all southerners, including southern forces in its bodies and institutions.

Peter Maurer, the president of the International Committee of the Red Cross (ICRC), expressed his delight at the meeting, thanking the president for the good reception and clarification of matters related to the south and the difficulties encountered in the ICRC's work in Yemen during the previous period.

Maurer praised the efforts of the Transitional Council in providing a better environment for the missions and work of the Commission.

Maurer expressed the ICRC's aspiration to strengthen its humanitarian work and role in prisoners release, noting that there is also a training program will be conducted to promote respecting international humanitarian law.