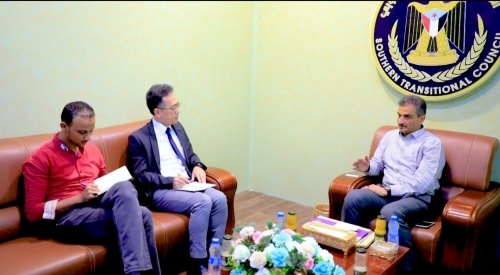 The Secretary General of the Presidency of the Southern Transitional Council, Ahmed Hamed Lamlas, received on Sunday at the headquarter of the General Secretariat of the Transitional Council, Mr. Masaki Watanabe, the Deputy Director of the Political Affairs Section in the Office of the UN Envoy in Aden the capital.

The meeting discussed a number of issues related to the situation in Aden the capital in various aspects and in the light of the recent developments.

The Secretary-General assured the continuous support of the Southern Transitional Council to the efforts of the UN Envoy, Martin Griffiths, and his positive interaction to make the peace process and the political settlement a success.

The Secretary-General presented a detailed explanation on the status of security and services in Aden and other governorates, explaining the role of the Transitional Council in the process of establishing stability and following-up services to be provided to citizens.

The Secretary-General noted to the escalation carried out by the military forces of the government and affiliated with the Islah Party and the repeated violations of the calls for military calm, and the work on military mobilization, pointing out that these forces brought elements of al-Qaeda and ISIS to the provinces of Shabwa and Abyan after the successful forces of the Shabwani elite and the security belt forces in fighting them over the past years.

For his part, Mr. Masaki Watanabe expressed his thanks and appreciation to the Secretary-General for the warm welcome and his continued cooperation with the Office of the UN Envoy in Aden, stressing on the importance of the dialogue called for by the Kingdom of Saudi Arabia in Jeddah between the Southern Transitional Council and the Government, noting that the United Nations, through its Special Envoy, supports this dialogue sponsored by Saudi Arabia.