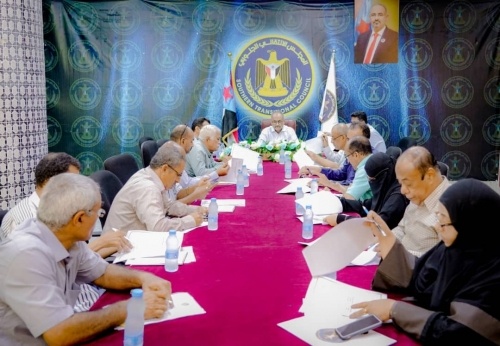 The General Secretariat of the Presidency of the Southern Transitional Council held on Monday its periodic meeting under the chairmanship of the Assistant Secretary General, Mr. Fadhl Mohammed Al-Jadi.

The meeting discussed the developments in the south in light of the recent events, praising the resistance of the southern armed forces against the terrorist groups embraced by the Brotherhood's government legitimacy.

The Assistant Secretary-General denounced the fatwa of the Islah Party against the southern people, stating that it comes in the context of the fatwas of 1994, which justified the war and the invasion of the south.

Al-Jadi stressed on the importance of the security institutions to play their role in maintaining security and stability in Aden the capital and all the southern governorates.

Al-Jadi called on all services sectors to continue providing services to citizens and improve the level of performance, stressing on the importance of resuming the educational process in schools and universities on time.

The meeting discussed the ongoing preparations for the mass rally event to be held in Aden the capital and the city of Mukalla, the capital of the province of Hadhramaut, as an honor of the leadership and people of the UAE for their support to the people of the South in the elimination of terrorist groups, as well as in the fulfillment of the South legitimate aspirations.