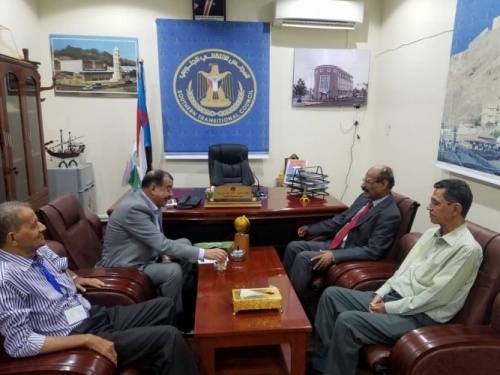 During the meeting, Major General Ben Brik discussed with Professor Al-Amoudi the latest updates related to the political process on the southern scene, as well as the latest results of the Southern Dialogue meetings.

Major General Ben Brik previewed the most important projects and future ideas that will be highlighted during the second phase of the Southern Dialogue, which witnessed a great success in consolidating the southern row with all parties and components.

For his part, Professor Al-Amoudi praised the steps of the leadership of the Transitional Council in adopting the visions and ideas that contribute in the construction and development, and the renounce of violence and extremism among the southern components, and the work on the reunification of the South and the preservation of the southern social structure.

The meeting was attended by Dr. Jonaid Al-Jonaid, Head of the Higher Education Committee at the National Assembly, and Dr. Mohammed Saeed Omer Al Amoudi, former Vice Dean of the Faculty of Computer Sciences at the University of Aden, and Dr. Ahmed Aqeel Baras, Director of the Chairman of the National Assembly office.