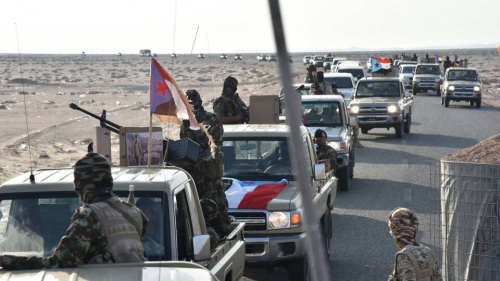 He was received  by the  elite ‘ Al Nokhba  Alshbwanih’  and a  gathering of residents of the province , led by a number of sheikhs and social representatives of the governorate.

Al-Zubaidi took off  this morning from the capital Aden  passing through Abyan governorate , where he was received by the ‘ Security Belt leaders’. The procession then continued its  journey to Azzan.

On his arrival Al Zubaidi and the accompanying members of the presidium were welcomed  by the people there who were pleased  because  their province,   was chosen to be the platform for the announcement of the  local leadership of the STC assembly for Shabwa governorate .

The STC Presidency has chosen Azzan province because it   enjoys security and stability following the  expulsion of terrorism.

It is worth mentioning that the  inauguration of the local STC assembly of  Shabwa governorate will be held tomorrow with the attendance of Al Zubaidi  accompanied by members of the presidency Ahmed bin Brek, Ahmed Hamid lamals ,Salem Alsuqatri , Adnan Alkaff .Sheikh Saleh bin Farid Al-Awlaki and Salem Thabet Al-awlaki