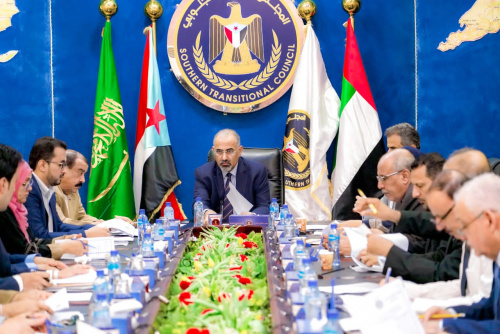 The presidency of the Southern Transitional Council (STC) held its periodic meeting, on Sunday morning, chaired by the president Aidarous Qassem Al-Zubaidi, President of the STC.

The presidency of the STC, in its meeting which was attended by several ministers of the STC in the power-sharing government, listened to a supplementary information on developments of the general situation in Shabwa governorate provided by Member of the STC's Presidency Mr. Salem Thabet Al-Awlaqi who reviewed the details of armed rebellion of the military and security units loyal to Muslim Brotherhood that have been bringing reinforcements from Mareb, Al-Gawf and Dhamar against implementing the decrees of the Presidential Leadership Council (PLC) and the local authority in Shabwa.

The presidency of the STC has lauded constancy of the local authority in the governorate led by the governor, Awad Ben Al-Wazir Al-Awlaqi and the security forces represented by Shabwa Defense Forces, and the widespread communal and popular cohesiveness, and rejection of the attempts of pro-Muslim Brotherhood troops to plunge chaos and violence into the governorate

The presidency has reiterated its condemnation of the armed attacks committed by Pro-Muslim Brotherhood rebellious forces targeting State Institutions, residential areas and health utilities, resulting in dozens of martyrs and wounded innocent civilians in violation of all the international and humanitarian charters, norms, values, and laws.

Likewise, the presidency renewed its call to all components of the society in the governorate to form a cohesiveness with the local authority in Shabwa to consolidate  its efforts in maintaining security, stability and normalizing the living situation.

Similarly, the presidency has lauded the responsible position of the PLC and implemented steps to end the rebellion and restore the stability to Shabwa, reaffirmed its endorsement to enable the people of the governorate to manage the public, military and security affairs of their governorate, as well as the exerted efforts by the governor in this respect.

In a separate context, the presidency of the STC has affirmed its support for the efforts of the UN special envoy Mr.Hans Grundberg, and US envoy Mr. Tim Lenderking, and stressed the necessity to include the cause of the people of the South in agendas of war-ceasing negotiations, putting a specific negotiating framework for this cause in the comprehensive peace process as dictated in the closing statement of the  consultations sponsored by the Cooperation Council for the States of the Arab Gulf (GCC) and expeditely forming a joint negotiating delegation, as per Riyadh consultations, reiterating adherence to prioritize the cause of the people of the South in all stages of the political process with no ifs or buts.

The presidency of the STC  has called the power-sharing government to perform its duties in brining the international and humanitarian organisations working in our country to urgently shift and re-open the main offices in the capital Aden, and perform all humanitarian activities through proper channels and under the supervision of the internationally recognized legal authorities.