General Secretariat Holds its Periodic Meeting; Discusses Reports of Departments and Developments in the Southern Arena

General Secretariat Holds its Periodic Meeting; Discusses Reports of Departments and Developments in the Southern Arena 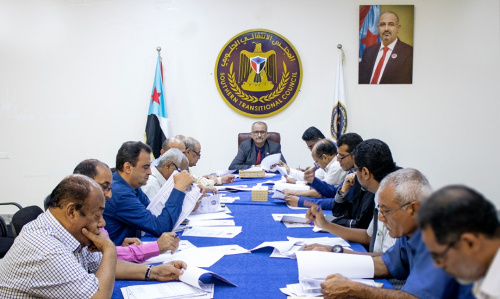 The General-secretariat of the Southern Transitional Council (STC) held its periodic meeting, on Wednesday, in the capital, Aden, chaired by Mr. Fadhl Mohammed Al-Gaadi, Deputy of the secretary general.

The meeting lauded the paid inspecting visit of president Aidarous Qassem Al-Zubaidi, President of the STC, and the favorable act to the southern wounded who are receiving treatment in a number of hospitals in Cairo, the Egyptian capital.

The meeting reviewed reports of the departments' activities of the general secretariat for the second week of June.

The meeting also discussed performance reports on the work of the Cultural Department, the Studies and Research Department, and the Youth and Student Department, during the first quarter of this year 2022.

In its meeting, the General Secretariat touched on developments in the southern scene, foremost of which are the efforts being made by the security service and civil communities, to combat the spread of drugs in certian governorates of the South, stressing the importance of preparing a unified policy in the concerned departments to raise awareness about the dangers of drug use and its negative impact on communities.