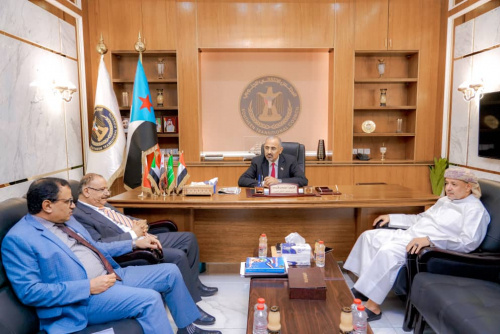 The President of the Southern Transitional Council, President Aidarous Qassem Al-Zubaidi, met on Thursday, the members of the Presidency of the Council, Major General Salem Al-Socotri, Minister of Agriculture, Irrigation and Fisheries, and Sultan Abdullah bin Issa Al-Afrar, Chairman of the General Council of the People of Al-Mahra and Socotra, in addition to Dr. Abdul Salam Humaid, Minister of Transport in the power-sharing government.

In the meeting, President Al-Zubaidi stressed the need to pay great attention to the governorates of Al-Mahra and Socotra, as they are the backbone of the aspired federal state of the South, and because of their role in embodying southern cohesion.

President Al-Zubaidi called on all parties to provide the necessary facilities to investors in the liberated governorates of the South in general, and Socotra and Al-Mahra in particular, in a way that contributes to economic recovery and the provision of services to society and citizens.

In turn, the member of the Presidency of the Transitional Council, Chairman of the General Council of the people of the governorates of Al-Mahra and Socotra, Sultan Abdullah bin Issa Al Afrar, confirmed that there are Yemeni Brotherhood leaders who are waging a brutal war against the people of the governorate by controlling all the joints of the military and security decision and the administrations in the governorate, pointing to handing over all authorities of Al-Mahra to its sons has become a very urgent matter, as they are the owners of the land, and those concerned with managing the affairs of their governorate, noting the necessity of re-operating Socotra Airport, continuing the required flights, and facilitating the entry of goods into the governorate.

For his part, the Minister of Transport, Dr. Abdel Salam Humaid, stressed that Socotra deserves all the attention, and that investors are directed towards investing in it, noting that the Ministry of Transport is working to provide all the necessary facilities for investors, and to overcome any difficulties related to its field of work to encourage investment in the governorates of the South, referring to the successful launch of the first investment in the field of maritime transport and the first passenger ship to Socotra, pointing out that this will motivate the rest of the investors to invest comfortably in various sectors.

At the conclusion of the meeting, the member of the Presidency of the Council, Minister of Agriculture, Irrigation and Fisheries, Major General Salem Al-Socotri, presented a full explanation of the political, military and security conditions in Socotra archipelago, stressing the importance of contributing to the recovery of Socotra, and the rest of the governorates of the South from their current status.