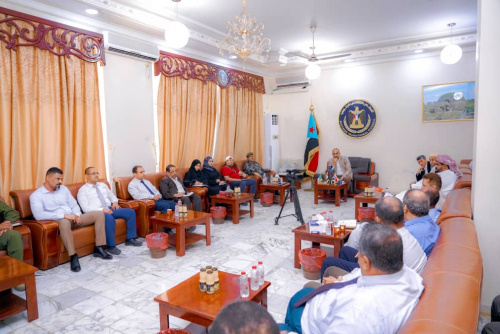 The President of the Southern Transitional Council, President Aidarous Qassem Al-Zubaidi, chaired on Monday, an important joint meeting that included the Supreme Economic Committee of the Council, and directors of exchange companies, the Southern Money Exchangers Association, and heads of commercial bank branches operating in the capital, Aden.

The meeting was attended by the Deputy Director of Security in the capital, Aden, Abu Bakr Jabr, and the commander of the security belt in the capital, Aden, Jalal Al-Rubaie, in which President Al-Zubaidi welcomed all the attendees, praising their efforts to control the deterioration of the local currency.

President Al-Zubaidi thanked all economists for taking responsibility for fixing the financial and economic imbalance left by the government, and filling the absence of the Central Bank, and its failure to assume its national responsibility towards the accelerated deterioration of the currency, highly appreciating the great role played by commercial banks and money exchangers in the capital, Aden, and their sense of responsibility to reduce the economic disaster left by the government and the Central Bank.

President Al-Zubaidi stressed that the government’s corruption and failure to perform its entrusted duties, and its failure to return to the capital, Aden, is the main reason for the historical deterioration of economic conditions, noting that the government and some of its ministers do not have any national conscience or sense of responsibility, leaving the simple citizens suffer from difficult living conditions.

Subsequently, the Supreme Economic Committee of the Southern Transitional Council, and the exchangers companies, the Money Exchangers Association, and the branches of commercial banks operating in the capital, Aden, all reached to an agreement of a number of important decisions aimed at limiting the deterioration of the currency.

It was agreed to reduce (5) riyals from the current daily price, starting from the date of 8/10/2021, with the aim of reaching, within five days, to (240) of the purchase price of the Saudi riyal against the Yemeni riyal and selling for (242), and the need to look after that on daily basis by the Payments Committee to continue decreasing the exchange rate against foreign currencies until the actual rate is reached.

It was also agreed that the security authorities would follow up and monitor the exchange market and take the necessary measures in the case of violation, in addition to continuing to hold meetings between the signatories to this agreement on a permanent basis to evaluate the progress of the agreed procedures.

In another context, it was agreed to form a Payments Committee headed by the President of the Chamber of Commerce, Mr. Abu Bakr Baobaid, and representatives from the Supreme Economic Committee of the Transitional Council and the Association of Money Exchangers and Commercial Banks, with the necessity of the commitment of banks branches and exchange shops not to transfer or deport foreign currency to areas under the control of the Houthi militia.

It was also agreed to allow internal transfers from liberated areas to non-liberated areas with a limit of (2000 dollars) per client, provided that strict punitive measures are taken against violators, including (closure, fine, and imprisonment), and this depends on the nature and size of the violation, in addition to the need to tighten monitoring the land, sea and air ports to prevent the smuggling of foreign currency from the liberated areas, and the confiscation of the smuggled funds in a way that ensures that the necessary measures are taken to curb it.

It was agreed to prevent buying and selling between money exchangers with each other and banks with each other, and to allow daily only selling within the limits of (100,000) Saudi riyals or its equivalent to merchants in the event that the amount exceeds this limit, according to instructions from the Payments Committee, and at the specified price, in addition to circulating these decisions to all money exchangers and banks in all liberated governorates.

In conclusion, President Al-Zubaidi stressed the need to work effectively with the economic decisions that came out today's meeting, and to strike with an iron hand against any party or person trying to tamper with the citizen's livelihood in the liberated governorates of the south.