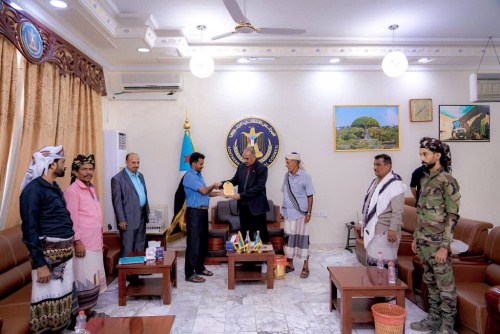 Notables of the Al Hotar Al-Markashi tribe from Abyan governorate honored the President of the Southern Transitional Council, President Aidarous Qassem Al-Zubaidi, on Saturday, in the capital, Aden, with a memorial shield, as an expression of gratitude for what he presented towards the late fighter of the homeland, Sheikh Abdullah Ahmed Al-Hotari, Adviser to the Secretary-General in the Secretariat General of the Presidency of the Transitional Council.

During the honoring, President Aidarous Al-Zubaidi thanked the notables of the Al Hotar Al-Markashi tribe, for this honor, expressing his pride that it came from one of the ancient tribes in Abyan governorate in particular, and the South in general, considering it an embodiment of the spirit of southern reconciliation and tolerance.

At the conclusion of the honoring, they stressed that all the sons of the Al Hotar Al-Markashi tribe, and all the people of Abyan governorate, stand united with the Southern Transitional Council led by President Al-Zubaidi, as the legitimate bearer of the cause of the South, and so to confront all the dangers facing the South and its steadfast people.