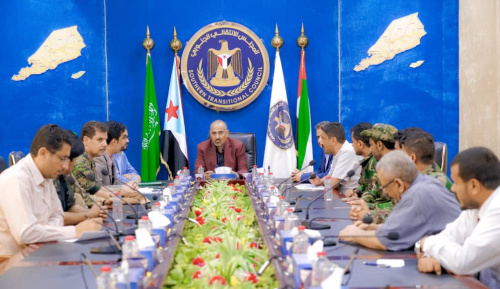 The President of the Southern Transitional Council, Supreme Commander of the Southern Armed Forces, President Aidarous Qassem Al-Zubaidi, met on Thursday, in the capital, Aden, with military leaders from Shabwa governorate.

The meeting was attended by the governor of the capital, Aden, the Secretary-General of the Presidency of the Transitional Council, Mr. Ahmed Hamid Lamlas, and member of the Presidency of the Council, Mr. Salem Thabet Al-Awlaki, and head of the General Directorate of Foreign Affairs of the Council, Mr. Mohammad Al-Ghaithi, the President’s Adviser for Military Affairs, Major General Mohsen Salem Askar, and Head of the executive body of the local leadership of the Southern Transitional Council in Shabwa governorate, Mr. Ali Ahmed al-Jabwani, and a number of military and security leaders, in which it discussed the most important developments in Shabwa governorate.

During the meeting, President Al-Zubaidi stressed the need to rescue the people of Shabwa governorate from the miserable conditions in which they live as a result of the practices of the militia of Brotherhood in the governorate.

President Al-Zubaidi stressed the importance of working seriously to get Shabwa out of the chaos it is witnessing, pointing to the importance of implementing the Riyadh Agreement, according to which all forces in Shabwa and Hadramout valley will leave, and the Shabwani elite will return to the governorate.

For their part, the military leaders of Shabwa governorate, briefed President Aidarous Al-Zubaidi on the latest developments in Shabwa, appreciating the moves of the leadership of the Southern Transitional Council led by President Al-Zubaidi that aimed at restoring the state of the South with its full sovereignty on the borders before May 21, 1990.