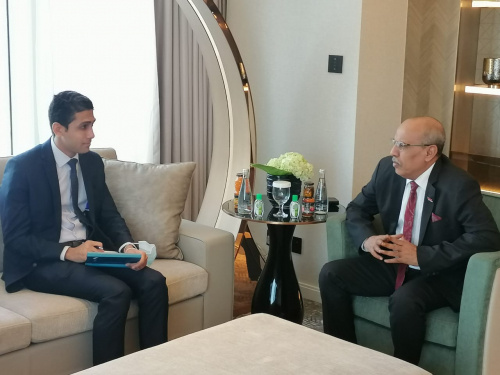 The member of the Presidency of the Southern Transitional Council, Deputy Head of the Negotiations Affairs Unit and the Council's delegation negotiating the implementation of the Riyadh Agreement, Mr. Ali Abdullah Al-Kathiri, met in the Saudi capital, Riyadh, Counselor Mohammad Al-Arian, the official responsible of the Yemeni file at the Egyptian Embassy in the Kingdom of Saudi Arabia.

In the meeting, Mr. Al-Kathiri welcomed Mr. Al-Arian, praising the Egyptian role and the historical relationship between the South and the Arab Republic of Egypt, stressing the positive interaction with Saudi efforts to complete the implementation of the Riyadh Agreement in all its political, economic and military aspects, and the importance of combating terrorism, which is a threat to everyone, and securing the territorial waters as local and international interest.

The two sides praised the support of the coalition countries led by the Kingdom of Saudi Arabia and the United Arab Emirates in this field, as well as the sacrifices made by the Republic of Egypt in the face of terrorism on its territory.

Al-Kathiri also stressed the importance of returning the government to the capital, Aden, and carrying out its tasks entrusted to it, which is to provide services to citizens, and work seriously to stop the collapse of the currency, and aggravating living of citizens in the liberated governorates of the South.

For his part, Mr. Al-Arian expressed thanks to Mr. Ali Al-Kathiri for the reception and meeting, stressing the importance of continuous cooperation between the two sides, and the readiness of the Republic of Egypt to participate in development and reconstruction.

The meeting was attended by the representative of the General Directorate of Foreign Affairs of the Council, Adel Al-Shabhi, and the member of the Council's delegation negotiating to implement the Riyadh Agreement, Fathi Al-Muflihi.