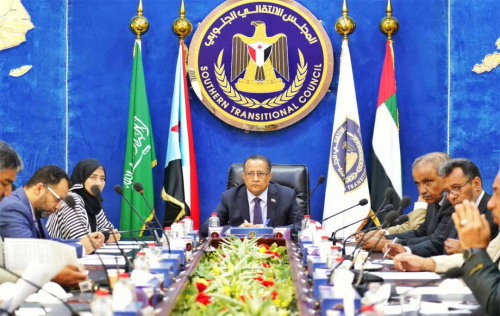 The Presidency of the Southern Transitional Council held on Wednesday, its second periodic meeting for this week, headed by Dr. Nasser Al-Khobaji, Acting President of the Council, Head of the Negotiations Affairs Unit.

In its meeting, the Presidency reviewed the economic and service situation in the capital, Aden and the rest of the southern governorates, in light of the report submitted by the Economic Department of the General Secretariat, renewing its demand for the parity government to quickly implement its obligations towards the rights of civilian and military citizens, with regard to salaries, and stop the collapse of the local currency’s value, and provide basic services .

The Presidency also renewed its warning against the practices of collective punishment and attempts to politicize services, and to exploit the protests of citizens, to use them as pressure for political blackmail, because of the dangerous repercussions for this on society.

The Presidency appreciated the support provided by the Kingdom of Saudi Arabia for oil derivatives, praising at the same time the efforts made by the local authority in the capital, Aden, and its governor, Mr. Ahmed Hamid Lamlas, to mobilize the available capabilities and resources, to provide the minimum basic services to citizens.

Regarding health conditions, the Presidency stressed the importance of providing the necessary medical equipment for treatment centers for those infected with the new Corona virus, and implementing the precautionary measures approved regarding reducing gatherings and setting work times in commercial complexes, markets, wedding halls, schools and universities, while continuing awareness campaigns on prevention methods to reduce infections, as well as coordination with the relevant UN and international bodies and organizations to obtain the necessary support.

The Presidency called on the council’s bodies at the governorate level, districts and centers to constantly interact with efforts to combat the epidemic in coordination with local authorities, community committees, and response mechanisms to support citizens throughout urban and rural areas, as well as employ the available media to raise awareness, besiege the epidemic and mitigate its severity.

In its meeting, the Presidency also stood in front of the developments in Hadramout governorate following the protests calling for better services and living situation, stressing its absolute rejection of the use of force and live bullets to disperse the demonstrators, and the need to respect the right of citizens to express their suffering by peaceful means.

In addition, the Presidency reviewed the successes achieved in light of the success of the holding of the General Conference of the Federation and Trade Unions of the South, stressing the need to support independent trade union work and enhance its role in developing work and public job entitlements in a way that serves the public interest and eliminate favoritism, bribery and corruption, confirming the Southern Transitional Council’s readiness to deal with the trade union activity of the workers of the South and the rest of the civil society organizations in a way that serves the interests of the South and the rights of its affiliates, away from the political employment of the voluntary, independent democratic activity.

The Presidency had reviewed and approved the minutes of its previous meeting, with an emphasis on the importance of continuing to implement the commitments and decisions taken in the Presidency’s meetings.