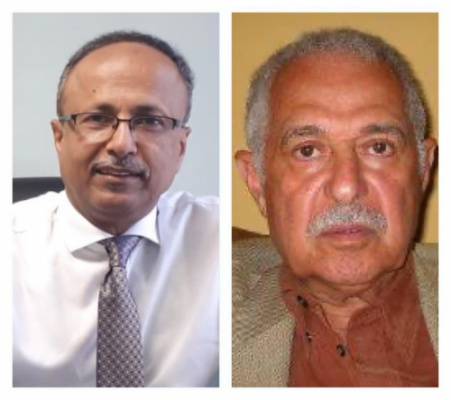 The Director of the General Administration of Foreign Affairs Office of the Southern Transitional Council in Canada, Abdul Karim Ahmed Saeed, met on Thursday, with Professor Taj Al-Khazin, member of the Norman Patterson Center for International Studies at Carleton University and an international expert on conflict affairs in Yemen and the region.

During the meeting, which was held by phone due to the Corona pandemic, Saeed discussed with Professor Taj Al-Khazen, some of the roots of the conflict and developments in Yemeni and Southern arena, and the importance of implementing any agreement reached by the parties.

Saeed affirmed the Southern Transitional Council's keenness to implement all the provisions of the Riyadh Agreement and what resulted from it, such as the formation of the parity government between the north and south, and its support to carry out its duty towards our people to alleviate their human suffering in various aspects and improve the lives of citizens.

Saeed pointed out that the Southern Transitional Council made major concessions in order to reach the Riyadh Agreement and form the government, and to create the atmosphere for the international envoy Martin Griffiths to make his efforts success for a comprehensive political settlement to solve the Yemeni crisis and bring peace to the South, Yemen, and the region in general.

The meeting touched on the recent terrorist acts that killed the heroes of the Security Belt and citizens in Ahwar district, and the failed assassination attempt in Aden the capital against Dr. Abdel Nasser Al-Wali, Minister of Civil Service and Insurance, member of the Presidency of the Southern Transitional Council.

Professor Taj Al-Khazin condemned terrorist acts that target the security services and important leaders in the state and citizens, stressing the importance of resolving disputes through political settlements and by peaceful means and dialogue, and not by violence and force, with need for serious work to stop the war by agreement, and then strict implementation with effective international guarantees.

He added, "The Yemen crisis can only be solved by diving deep into its roots to reach real and sustainable understandings between the north and the south, away from sectarian, religious and tribal tendencies."

He mentioned that the liberalism sought by the South has been in a continuous clash with political Islam during the past 15 years without much success.

The meeting also discussed a number of common issues, and developing the relationship between the Office of the General Directorate of Foreign Affairs of the Southern Transitional Council in Canada and the Norman Patterson Center for International Studies at Carleton University to carry out some cultural and political activities and events that are organized by the center at the university.