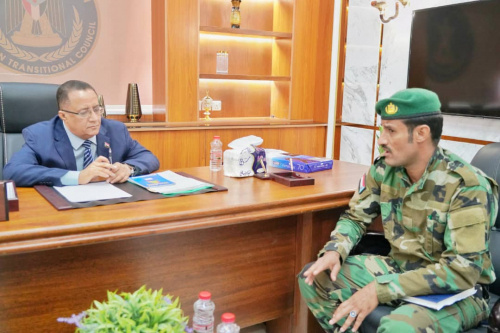 Dr. Nasser Al-Khobaji, the member of the Presidency of the Southern Transitional Council, Acting President of the Council, met on Wednesday with Brigadier Jalal Al-Rubaie, the Commander of the Security Belt in Aden the capital.

In the meeting, which was attended by Mr. Abdulrahman Sheikh, the member of the Presidency of the Transitional Council, and Anis Al-Sharafi, the member of the Negotiations Affairs Unit, Dr. Al-Khobaji discussed with Al-Rubaie the security situation in the capital Aden, and the efforts made in this regard.

Dr. Al-Khobaji praised the security role that the men of the Security Belt play in combating the crimes of all kinds, foremost among which are the attempts to disturb public tranquility, and drug trafficking and the promotion for it.

For his part, the Commander of the Security Belt in Aden the capital, assured the vigilant and readiness of the security belt to stand against all the moves and acts that aim at disturbing the situation in Aden the Capital.