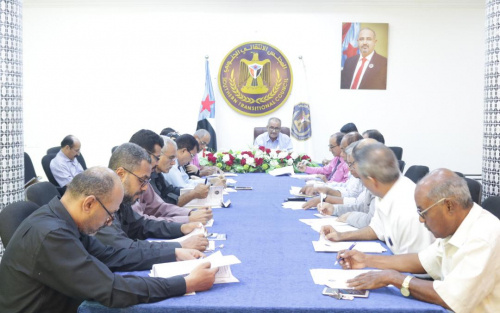 The General Secretariat of the Presidency of the Southern Transitional Council held on Monday, its periodic meeting chaired by Mr. Fadl Mohammad Al-Jaadi, the Deputy Secretary-General.

The meeting reviewed the economic scene report submitted by the Economic Department, which dealt with several economic issues related to the current situation, foremost of which is the increasing in commodity prices, particularly food, and the recent increase in the price of oil derivatives and their repercussions that doubled the suffering of citizens.

The economic report provided a comprehensive reading of the poor level of services in the South, specifically in the capital Aden, especially in the electricity power service, as well as the demographic change that Aden the capital  is undergoing due to politicized and unjustified displacement, until the capital becomes filled with displaced persons who have become a burden on it, in which some of them live in better living conditions than the capital citizens.

The report also referred to the issue of delaying the payment of salaries to the military and civilian sectors, as well as the difficult situation of some hospitals in the capital, and other economic challenges that are on the shoulders of the South and its citizens.

The meeting also reviewed reports of performance level of Studies and Research Department, as well as the Social Affairs Department for the period January 2021 until the date of the meeting, including the most prominent achievements of the two departments and their accomplishments during the aforementioned period.

The meeting discussed the most prominent developments in the local arena, including political, economic, security and service developments in the capital Aden and the Southern governorates in general, as well as issues related to the organizational workflow in the departments of the General Secretariat and the executive bodies in the governorates, and their assigned tasks to be implemented.

The meeting reviewed the weekly activities report of the General Secretariat departments, which included the most prominent activities carried out by the departments and their work teams during the past week.