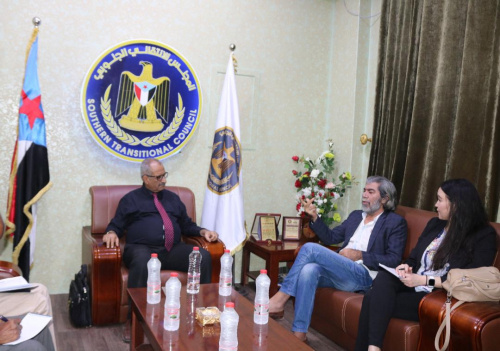 The Deputy Secretary-General of the Presidency of the Southern Transitional Council, Mr. Fadl Mohammad Al-Jaadi, met on Sunday, at the headquarters of the General Secretariat of the Council with Mr. Marwan Al-Ali, Director of the Office of the United Nations Envoy to Yemen Martin Griffiths in Aden the capital.

During the meeting, Al-Jaadi reviewed with Al-Ali a number of issues related to the latest developments on the local and international arenas and their implications for the situation in the South and Yemen.

The Deputy Secretary-General affirmed that the Southern Transitional Council adheres to the government of parity and is keen to ensure the success of its work, and to implement the remaining provisions of the Riyadh Agreement, despite some attempts to put obstacles before the government and tighten the screws on it in order to be thwarted and to thwart the Riyadh Agreement.

The meeting touched on the importance of the south-south rapprochement, and in this regard Al-Jaadi assured the director of the UN envoy’s office that the Southern Transitional Council believes that the south is for all its sons and all its people, and that its hand is extended to all southern parties to reach an agreement that satisfies everyone and serves the southern cause and fulfills the will of the people the South.

For his part, the director of the UN envoy’s office in the capital, Aden, expressed his satisfaction with the seriousness and openness of the Southern Transitional Council to deal with all issues and developments, hoping that the international community would find ways to end the war and bring about comprehensive peace in the south and Yemen.