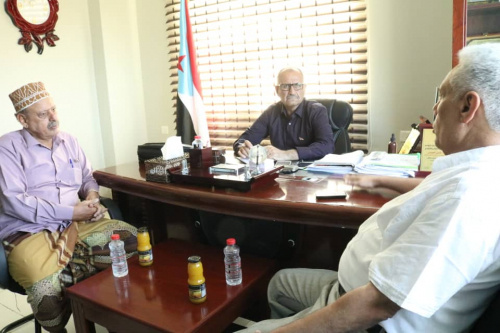 In the meeting, both sides discussed the latest developments in the political arena and the efforts made to implement the Riyadh Agreement in order to increase the pace of the work of the state's service and security institutions, and the trend towards confronting the Houthi militia and extremist forces for the interest of security and stability in the south, Yemen and the countries of the region.

Al-Jaadi stressed the importance of concerted efforts and strengthening joint action to face the challenges and obstacles posed by the extremist forces supporting terrorism that want to obstruct the implementation of the Riyadh Agreement and limit their influence and presence on the political scene.

In the meeting, Al-Jaadi praised the courageous position shown by the Nasserite Unionist Organization, the Yemeni Socialist Party, and the General People's Congress, who rejected the unilateral decisions taken by the Yemeni presidency aimed at disrupting the process of completing the implementation of the Riyadh Agreement, and confusing the scene and thwarting the work of the government of parity between the South and the North resulted from the agreement.

For his part, Numan stressed the importance of coordination and opening communication channels to enhance joint action between other parties that reject unilateral decisions with the Southern Transitional Council to face the challenges that hinder the stability of the security and living conditions of the citizens.

Numan also confirmed the organization's readiness to redouble its efforts with all legal authorities to confront those decisions, which reflect a clear violation of the constitution and the laws in the country.