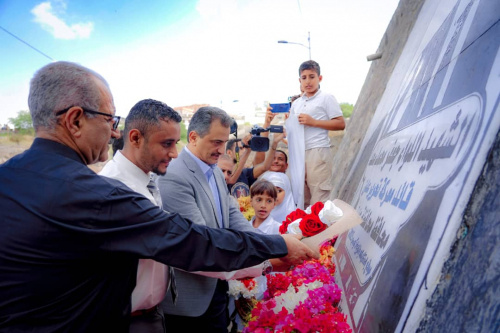 The Secretary-General of the Presidency of the Southern Transitional Council, Governor of Aden the capital, Mr. Ahmed Hamed Lamlas, and Mr. Fadl Mohammad Al-Jaadi, the Assistant Secretary-General, laid a wreath on Sunday, in front of the memorial plaque of the martyrdom site of Major General Jaafar Mohammad Saad, the former governor of the capital Aden, on fifth anniversary of his martyrdom.

In the event attended by Mr. Lotfi Shatara, Nasser Al-Shaybah, Dr. Soheir Ahmed Ali, and the son of the martyr; Mohammad Jaafar Mohammad Saad, and heads of departments of the Secretariat and a large crowd of citizens.

The participants stood for a minute and read Surat Al-Fatiha to the spirit of the martyr Jaafar and his companions, and pray for them with forgiveness and mercy.

Lamlas spoke at the event saying: “The martyr Jaafar was one of the sincere men who carried the concerns of their homeland and worked to search for stability and development for its citizens, and he paid his life for that, and he was the victim of treachery and terrorism by the enemies of the homeland and humanity, ".

Lamlas wished safety for everyone, and terrorism to be departed from Aden and the whole homeland.