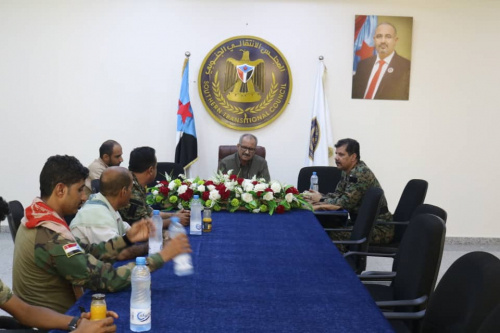 The Assistant Secretary-General of the Presidency of the Southern Transitional Council, Mr. Fadl Mohammad Al-Jaadi, received, on Sunday, at the headquarters of the General Secretariat, Brigadier General Adel Ali bin Ali Hadi Al-Musabi, Commander of the Special Forces Brigade and Combating Terrorism.

In the meeting, Al-Jaadi and Brigadier General Adel Al-Musabi discussed the latest developments and the security and military situation in the southern governorates.

The Assistant Secretary-General praised the role of the brigade’s leadership in the “Malahiz - Maran” front in the Yemeni governorate of Saada on the southern borders of the Kingdom of Saudi Arabia and its confrontation with the terrorist Houthi militia.

For his part, Brigadier General Adel Al-Musabi expressed his happiness with this meeting, praising the role of the Transitional Council in confronting the forces of terrorism, stressing on standing by it in its war against terrorism and extremism.

The meeting was attended by Lt. Col. Mohammad Salem Al-Bohar Al-Qumishi, Commander of the Second Brigade in the Shabwani Elite.