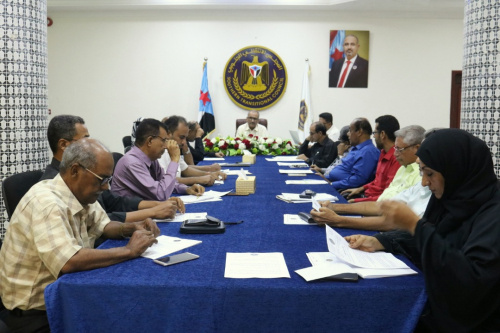 The General Secretariat of the Presidency of the Southern Transitional Council held its periodic meeting headed by Mr. Fadl Mohammad Al-Jaadi, the Assistant Secretary-General.

The secretariat reviewed the political and military developments throughout the southern homeland, supporting what was issued by the Presidency of the Council at its latest meeting in this regard.

After that, the meeting listened to a report on the political scene presented by the political department, which dealt with the most prominent political issues related to the south, and the recent movements and escalation of Brotherhood militias on the fronts of Abyan axis, which came as part of the attempts to obstruct and thwart the implementation of the Riyadh Agreement, as well as the provocative decisions against the south .

The meeting reviewed the performance report of the Cultural Department, which emphasized the importance of preserving the cultural heritage of the south, including monuments, arts, architecture… etc. and the encouragement to southern youth and support their cultural projects, besides the department's activities during the last period.

The meeting addressed many prominent issues and developments in the southern arena, especially those directly related to the lives and livelihoods of citizens, and took the necessary measures regarding them.

The meeting had reviewed the completion reports of the activities of the General Secretariat departments during the past week, as well as the minutes of its previous meeting that were approved.