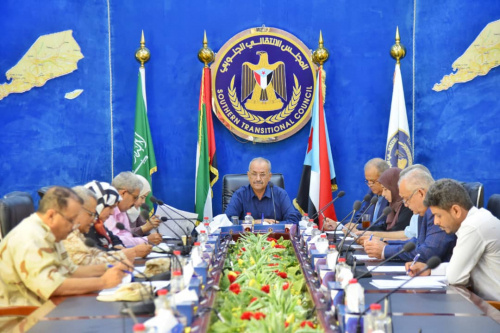 The Presidency of the Southern Transitional Council held its periodic meeting on Sunday, chaired by Mr. Fadl Mohammad Al-Jaadi, the Assistant Secretary-General of the General Secretariat of the Council Presidency.

At the beginning of the meeting, the Presidency stood before the report submitted by Brigadier General Mohsen Askar, the advisor to the Council’s president for military affairs, on the military developments and the escalating breaches of the terrorist Brotherhood militia backed by al-Qaeda and ISIS terrorist elements on the fronts of Abyan axis.

The Presidency praised the legendary steadfastness of the southern armed forces and their steadfastness in thwarting all attempts of the terrorist militias supported by Qatar and Turkey, stressing that these are the last attempts to abort the implementation of Riyadh Agreement, stressing at the same time that the continuation of these criminal violations and attacks on the sites of our southern forces will not keep them in defense sites continuously. .

In another matter, the meeting discussed the preparations and arrangements made by the Preparatory Committee for the activities of the celebration of the 53rd anniversary of the National Independence Day, the 30th of November, and in this regard, the Presidency stressed the need to complete all preparations on time and produce the festive activities in a manner befitting this great occasion.

The meeting also listened to the weekly activity report for the presidency of the assembly and its committees, in addition to the report on the activities of the General Secretariat of the Presidency and its departments.

In conclusion, the meeting previewed a number of miscellaneous topics related to the Council's work and took the necessary actions in their regard.

The meeting was attended by Brigadier General Mohsen Al-Wali, Commander-in-Chief of the Support and Backup Brigades, and Major General Saleh Ali Hassan, Deputy Commander of the Joint Operations Authority.