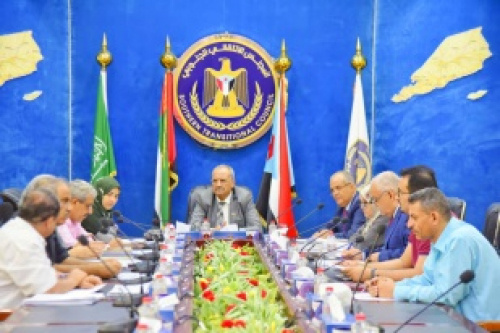 The Presidency of the Southern Transitional Council held on Sunday, its periodic meeting chaired by Mr. Fadl Mohammad Al-Jaadi, the Assistant Secretary-General of the General Secretariat of the Presidency.

The meeting stood before the report of the two committees of the Presidency in charge of evaluating the performance of the executive bodies in the two local leaderships in the governorates of Lahj and Abyan and their districts, and took the necessary measures regarding them.

The Presidency also reviewed the vision presented by the National Assembly regarding the tasks of the Transitional Council in accordance with the Riyadh Agreement, and listened to the observations and suggestions of the members in this regard.

In the context of its discussion about developments on the national scene, the Presidency appreciated the steadfastness of our southern armed forces on all fronts, to thwart the Brotherhood-Houthi alliance, especially in the Shokra, Karsh, and Tor al-Baha fronts, which are witnessing a Houthi-Brotherhood escalation, praising the valor and steadfastness of our southern forces to thwart this scheme.

Regarding the political scene, the Presidency of the Transitional Council stressed on the need to expedite the government’s announcement to cut off the road to foreign interference represented by "Qatar, Turkey and Iran," which are trying to escalate the military and continue the economic and service blockade, and obstruct the disbursement of the salaries of the southern military in its effort to thwart the Riyadh agreement.

In conclusion, the meeting discussed a number of topics on its agenda and took the necessary measures in this regard.