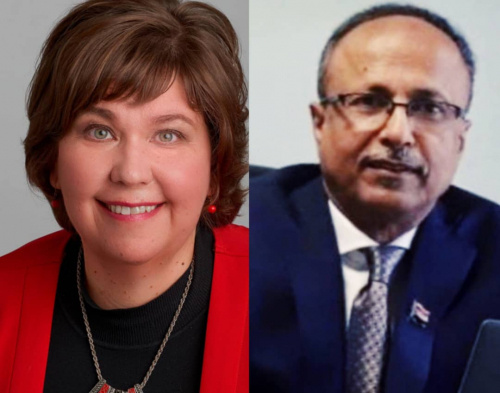 The head of the Foreign Affairs Office of the Southern Transitional Council in Canada, Abdul Karim Ahmed Saeed, discussed with Ms. Anita Vandenbald; the National Defense Officer in the Canadian House of Representatives, the latest developments in the Yemeni and southern arena in particular.

This came during a phone call made by Mr. Anita Vandenbald, on Friday, with the Head of the Foreign Affairs Office of the Southern Transitional Council in Canada, Abdul Karim Ahmed Saeed, who briefed her on the human suffering of the people of the South and the challenges facing the implementation of the Riyadh Agreement.

Saeed put the Canadian side in the picture regarding the return of terrorist groups to the deployment in the governorates of Abyan and Shabwa, and the military build-up and the continuous violations carried out by the forces of the so-called Yemeni legitimacy in Abyan, and their knowledge of the tragic conditions and the systematic collective punishment practiced by the Yemeni government against our people in the south, through the war of services and the deterioration of life living, service, health and currency deterioration.

Saeed also called on the Canadian government to provide relief and humanitarian aids, including medical, food, economic and financial support for our people to get out of this humanitarian ordeal, in addition to political and logistical support for the Southern Transitional Council in combating terrorism and extremism.

Ms. Anita expressed her readiness to provide support and assistance to our people in the south and Yemen in general to alleviate human suffering through the Canadian Ministry of Development and International Cooperation, and it was agreed to continue communication with the Foreign Affairs Office of the Southern Transitional Council in Canada, and to follow up on a number of issues that were raised.