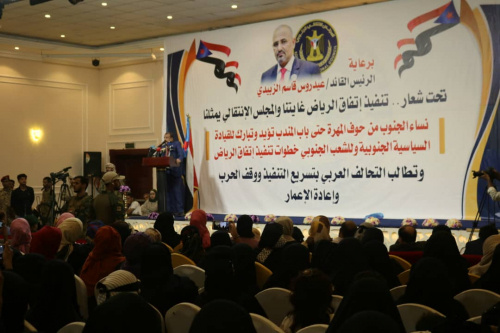 The High Preparatory Committee for Southern Women organized, on Monday, in the capital Aden, a major ceremony under the slogan “Implementing the Riyadh Agreement is our goal ... and the Transitional Council represents us,” in baking and support for the efforts to implement the Riyadh Agreement, under the auspices of President Aidaroos Qasim Al-Zubaidi, the President of the Southern Transitional Council.

Major General Ahmed Saeed bin Brik delivered a speech at the ceremony, in which he conveyed to the participants the greetings of President Aidaroos Qassem Al-Zubaidi, , and the members of the Transitional Council negotiating delegation in the Saudi capital, Riyadh.

Major General Bin Brik stated mercy on souls of all the martyrs who sacrificed their lives to defend the land of the South, especially in the battle against terrorism and extremism, stressing that the Transitional Council stood by the Arab coalition led by the Kingdom of Saudi Arabia and the United Arab Emirates against the Brotherhood and Persian projects that target the security of the region.

In the context of his speech, Bin Brik welcomed the new governor of Aden, Mr. Ahmed Hamed Lamlas, stressing that the load is very heavy, and that the Transitional Council will be at his side and will help him, and all the honorable people of the south, especially the sons of the beloved Aden.

Before that, Ms. Najwa Fadl, the advisor to the President of the Transitional Council for Women’s Affairs, started the ceremony with a spech in which she confirmed that the southern woman was present at all national events and events that marked victory for the south, and she demanded an end to the bloodshed due to the violations of the other party that took many lives, in the Sheikh Salem area of ​​Abyan, noting that the women of the south raise their voices loudly to say no to war and yes to peace and construction.