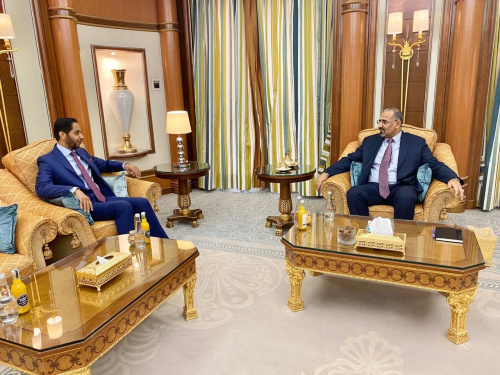 The President of the Southern Transitional Council, Supreme Commander of the Southern Armed Forces, President Aidaroos Qassem Al-Zubaidi, received on Thursday, at his residence in the Saudi capital Riyadh, the Ambassador of the Republic of Djibouti, Ziauddin Bamakhrama.

In the meeting, President Aidaroos Al-Zubaidi reviewed the march of the southern struggle to restore the Southern state, stressing that the Southern Transitional Council is keen to establish peace and stability, and will not neglect the gains of the people of the South, or give up their goals and aspirations aimed at restoring and building the federal state of the South on its full borders before May 21, 1990.

President Al-Zubaidi presented to the Djiboutian ambassador a brief explanation about the latest developments regarding the implementation of the Riyadh Agreement and the obstacles facing it by forces affiliated with the Yemeni government, which want to abort the agreement, and including summoning regional forces hostile to the Arab Coalition.

President Al-Zubaidi stressed on the commitment of the Southern Transitional Council and its keenness to implement the Riyadh Agreement, and its full support for the relevant efforts of the Kingdom of Saudi Arabia, stressing also on the need to address the reasons that led to the suspension of the Southern Transitional Council for its participation in the ongoing consultations to implement the agreement.

For his part, the Ambassador of Djibouti affirmed his country's support for the efforts led by the Kingdom of Saudi Arabia to implement the Riyadh Agreement, stressing his country's keenness to establish security and stability in our country.

The meeting was attended by the negotiating delegation accompanying the head of the Southern Transitional Council, Dr. Nasser Al-Khobaji, member of the Presidency, Head of the Negotiations Affairs Unit, and members of the Presidency, Mr. Ali Al-Kathiri, Mr. Abdulrahman Al-Yafie, Eng. Adnan Al-Kaf, Mr. Salem Al-Socotri, and Mr. Mohammad Al-Ghaithi, Deputy Head of the General Department for Foreign Affairs, and Mr. Anis Al-Sharafi, member of the Negotiations Affairs Unit.