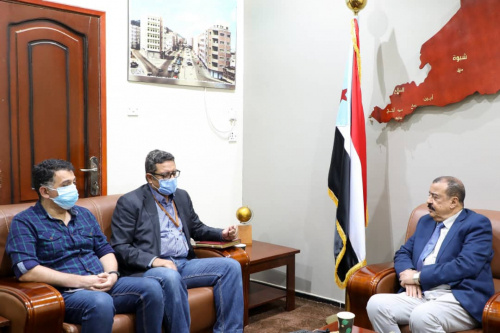 The Acting President of the Southern Transitional Council, and Chairman of the National Assembly, Major General Ahmed Saeed bin Braik, received on Monday, at the Assembly's headquarters, Mr. Mohammad Radwan, Acting Director of Security and Safety at the United Nations Office in the capital Aden.

Major General Bin Brik welcomed Mr. Radwan and his companions, praising the role of international organizations present on the ground, including the United Nations office, and their active and tangible role - each with its specialization - in raising the suffering of citizens in the southern governorates, by providing hospitals with medical and therapeutic supplies, as well as contributing to improve the general living conditions of the citizens by distributing food baskets and essential household items to those affected by the recent war (the Houthi war) on the south.

Major General Bin Brik also valued the support provided by international organizations to those affected by the torrents and rains that struck Aden and the southern governorates recently and left a lot of destruction, whether in the country's infrastructure or the destruction of private property of citizens.

For his part, Mr. Radwan thanked Major General Ahmed Saeed for the good reception and the time to exchange with him issues related to relief organizations in Yemen in general and the South in particular, stressing that the United Nations office works in a neutral manner away from the ongoing conflicts between the conflicting parties on the scene, and is ready to provide aid to all those in need wherever they are.