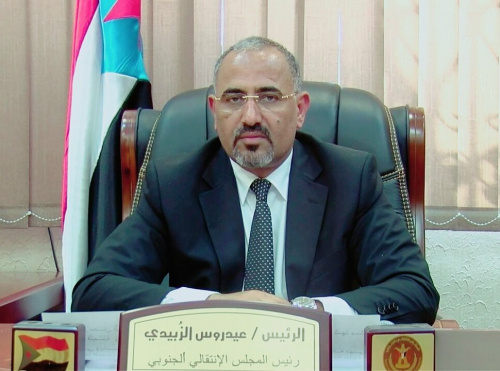 In his speech, President Al-Zubaidi said that thirty years have past in which we lived in the worst stage after targeting our homeland, our people, and our identity under the project of the unjust unity, from which our people got nothing but killing, abusing, suffering, oppression, and humiliation, and since July 7, 1994 soon that unity became the worst occupation in modern history.

President Al-Zubaidi said that we have adopted peace and have chose the dialogue option out of our belief that it is the best way to resolve disputes. On this basis, we went to Jeddah and then to Riyadh, and we overlooked many of the attacks, violations, and provocations practiced by the Yemeni government forces, in the hope of the success of the efforts of the brothers in the Kingdom of Saudi Arabia to implement the Riyadh Agreement, but we have faced irresponsible forces whose approach is terrorism and chaos, and do not respect the covenants and agreements, in which they see in the other side only a subordinate subject to their authority and arrogance, which imposes on us defending the gains and freedom of our people in the face of the war machine and terrorism that have been exported for three decades by the forces of Sana'a regime to the south.

President Al-Zubaidi stressed that today there are brute military mobilization campaigns remind us the wars of the previous invasions on the south in 1994 and 2015, which are being led today by the Houthi militias on one side, and the Brotherhood militias on the other, leaving Sana'a and Marib behind and directing their strength and weapons towards the south, and raising hollow slogans to liberate the liberated land, and then deliver it to Houthi and Iran, as happened in Al-Jawf and Marib, or to Qatar and Turkey, as happened and still happening in Shabwah, Taiz and Al-Mahra, ignoring the choices and aspirations of the people of the South, and the dangers approaching to the regional national security, and the Arab project led by the Kingdom of Saudi Arabia.

President Al-Zubaidi addressed the people of the south, saying now it's the time to defend the national gains, calling them to be prepared to support the hero forces on all fronts of fighting, and to defend the south in the face of the invasion of Houthi and Brotherhood militias, pointing out that we are in an open war with the forces hostile to our national project, top of which are al-Qaeda and ISIS organizations, and to defend the aspirations of our southern people and their choice of independence, restore, and build their full sovereignty modern federal state. Al-Zubaidi stressed that this battle does not concern the southerners alone, but also the countries of the region and the whole world due to the strategic interests related to the protection of maritime navigation lines, international security, and peace in the Gulf of Aden and Bab Al-Mandab.

President Al-Zubaidi addressed the southern forces, saying that the enemies of the south lie in wait for it from all sides, calling on the forces to be ready and decisive as usual in the face of the brutal aggression, pointing out that today we are facing a fateful war that puts us before a serious test in which we confirm that we are on the responsibility level to get victory for the souls of our martyrs who redeemed with their pure blood and pure souls, the land of the South for the free and dignified life of our people, and it's up to us now to dedicate our efforts to complete this great task for this people to enjoy freedom and independence that they have long struggled for.

President Al-Zubaidi assured at the conclusion of his speech to trust that victory is our ally, because we have the right, just national cause, and legitimate aspirations, and we are on the covenant of men to men to remain as the land of the South until its complete independence.