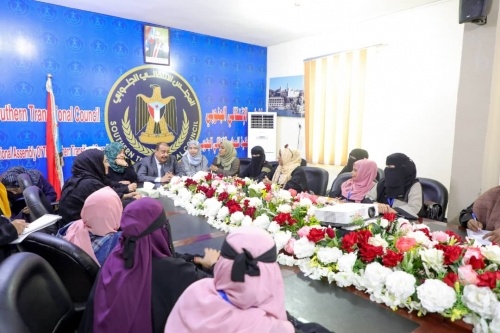 Major General Ahmed Saeed bin Brik, Acting President of the Southern Transitional Council, Chairman of the National Assembly, met on Thursday at the Assembly’s headquarter in Aden the capital, directors of women and children departments in the local leaderships in the southern governorates and the capital Aden.

In the meeting, Major General Bin Brik welcomed all of the attendees, congratulating them on the occasion of International Women's Day and Mother’s Day, which are on 8 and 21 March.

Major General Bin Brik praised the role, activity and work of the women and children departments and what they are doing in all fields, expressing the satisfaction of the leadership of the Transitional Council for the role played by women and their central position in the map of construction and development.

The meeting stood before the most prominent issues that concern the work of the women and children sector in the Transitional Council and the Assembly and ways to activate its activities at the governorate level.

The meeting touched on the topic of the Southern Dialogue, which was called for by the Southern Transitional Council, for dialogue with all components, parties and spectrums, including southerners, in order to unify the southern ranks and come up with solutions that are in the interest of the South.

Major General Ahmed Saeed affirmed that the Southern Transitional Council is a bowl for all southerners, and is working hard in all levels to restore the southern state of full sovereignty, so that its citizens enjoy the good of their country.

Ben Brik pointed out that the formation of the Southern Transitional Council, terrified the forces hostile to the south, and stopped many of the issues that would lead to failure.

On her part, and on behalf of the attendees, Ashtiaq Mohammad Saad, Head of the Women and Children Department in the General Secretariat, praised Major General Bin Brik, for his opening and the clarification he provided on the developments on the southern scene.