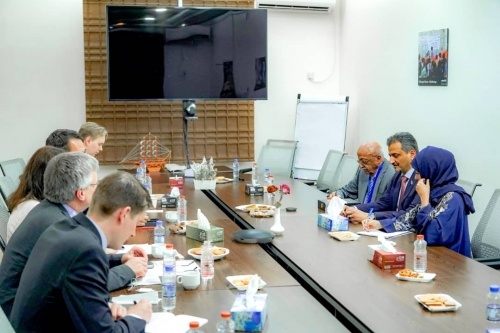 The Secretary General of the Presidency of the Southern Transitional Council, Mr. Ahmed Hamed Lamlas, met today evening with Ms. Anne Lindy, the Minister of Foreign Affairs of the Kingdom of Sweden, and Mr. Peter Sembenby, the Swedish Special Envoy for the Middle East and North Africa, and Mr. Niklas Trophy, the Ambassador of the Kingdom of Sweden, as part of their short visit to the capital Aden.

In presence of the advisor of the President of the Transitional Council for Foreign Affairs, Dr. Abdulaziz Al-Dali, the Secretary-General welcomed the Minister of Foreign Affairs of the Kingdom of Sweden and the accompanying delegation, expressing his happiness for this visit, which comes in the context of the vigorous efforts led by the Kingdom of Sweden to bring peace to Yemen.

The Secretary-General discussed with Ms. Ann Lindy the progress of the political process in Yemen in light of the recent developments, especially the international efforts aimed at ending the crisis and conflict in Yemen, as well as the regional efforts that push towards correcting the political situation in the liberated areas.

The Secretary-General clarified that the Southern Transitional Council, during the past period, was keen on positive and constructive engagement to contribute in assisting the international efforts to bring peace, as well as to deal with the efforts of the Arab Coalition, and signing an interim agreement and roadmap between the Transitional Council and the government under the sponsorship and supervision of the Kingdom of Saudi Arabia, which would contribute and pave the way for international efforts to restore the path of the political process and complete its endeavors to achieve comprehensive peace.

The Secretary-General previewed the obstacles placed by intractable parties within the Yemeni government to impede the implementation of the agreement, noting that these parties push to prolong the war for investment and trade through it, stressing that the Transitional Council is determined and resolute with the wise leadership of the Kingdom of Saudi Arabia to implement the agreement, and pushing for life normalization, and addressing political and economic conditions, and preparing for engagement in the final political process to reach a settlement that ends the conflict and establishes a lasting and sustainable peace.