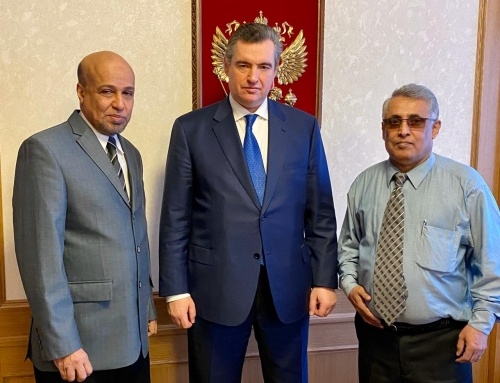 The Head of the Foreign Affairs Committee of the Russian Parliament, Leonid Eduardevich Slotsky, received on Friday, Dr. Ali Al-Zamki, Head of the General Directorate of Foreign Affairs of the Southern Transitional Council in Russia and Independent States.

In the meeting, that took place in the main building of the Russian Parliament in the capital, Moscow, Dr. Ali Al-Zamki, delivered to the Russian official a written message from the President of the Southern Transitional Council, President Aidaroos Al-Zubaidi, related to developments in the events in the southern political scene in particular, and in Yemen in general.

Al-Zamki discussed with the Head of the Russian State Duma Foreign Affairs Committee, the terms of the Riyadh Agreement, and what has been accomplished to date and what has not been implemented, and the reasons for obstructing the implementation of the Agreement terms.

Al-Zamki expressed to the Russian official the deep gratitude of the Southern Transitional Council to the role that the Russian Federation plays in combating terrorism and bringing peace to Yemen and the region.

Al-Zamaki informed Mr. Leonid Eduardevich Slotsky, the adherence of the Southern Transitional Council, under the leadership of President Aidaroos Al-Zubaidi, to implement all the contents of the Riyadh Agreement without selectivity, and according to the timeline stipulated in the terms of the agreement.

The meeting was attended by Dr. Mohamed Badhorais, Deputy Head of the General Directorate of Foreign Affairs Office of the Transitional Council in Russia and Independent States.