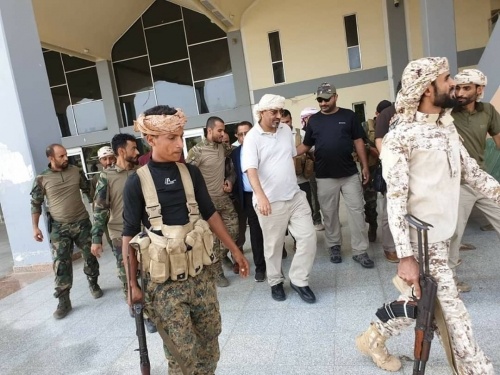 Accompanied by his deputy Hani bin Brik, and Ahmed Hamed Lamlas, Secretary-General of the Presidency of the Transitional Council, and Dr. Nasser Al-Khubaji, member of the Transitional Council Presidency, President Al-Zubaidi toured the various facilities of the airport, stressing on the need to resume the airport operations at full speed, in order to play its role in the service of travelers and wounded who need to complete their treatment abroad.

President Al-Zubaidi commanded the security forces stationed at the airport and its surroundings to be vigilant and alert to any attempt to create chaos by terrorist and outlaws elements.

As part of his field visits, President Aidaroos Al-Zubaidi and his companions paid a visit to a number of security points in the districts of Aden the capital.

President Al-Zubaidi urged the individuals stationed at the security points to be vigilant and to deal firmly with those who want to destabilize security and stability.