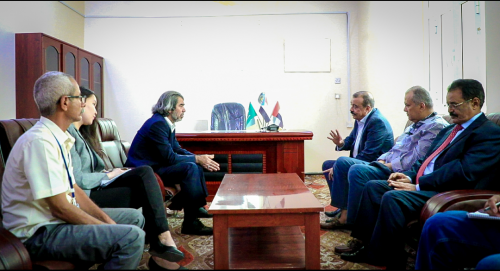 The Chairman of the National Assembly of the Southern Transitional Council, Maj. Gen. Ahmed Saeed bin Brik, met on Thursday Mr. Marwan Ali Khouri, Director of the Office of Martin Griffiths, the UN Envoy to Yemen, in Aden the capital.

The meeting discussed the updates of the situation in Aden the capital and the exerted efforts of the UN envoy to Yemen, Martin Griffiths, to resolve the Yemeni crisis and the Southern issue and find ways to reach positive solutions that satisfy everyone to ensure peace in the region.

The meeting previewed the Southern Transitional Council efforts in normalizing the citizens living conditions, and its support to the work progress in public services, military, and security institutions, as well as the work continuation of the UN organizations in Aden the capital.

The Chairman of the National Assembly said that despite the obstacles caused by the so-called legitimate government to disrupt services to citizens and increase their suffering, the situation now in Aden the capital has returned to normal through the return of work in all public services institutions.

For his part, the Office Director of the UN Envoy to Yemen in Aden the capital, , affirmed the support of the United Nations to all efforts aimed at continuing the work of the UN and international organizations to provide services in all fields, praising the efforts and the role played by the Transitional Council in this regard.