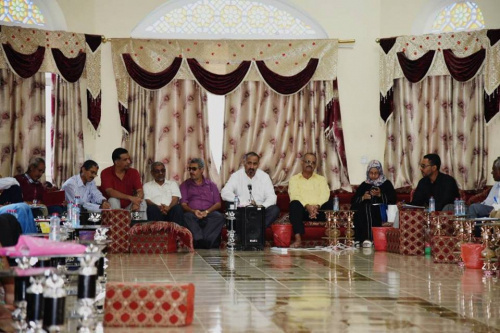 The President of the Southern Transitional Council – Major General\ Eidaroos Qasim Al-Zubaidi, met on Wednesday morning with leaderships of the trade unions of Aden the capital and a number of southern provinces.

The meeting, that was attended by a number of the Southern Transitional Council presidency members, discussed the deterioration of the living conditions in the capital Aden and the rest of the southern governorates, in light of the government's failure and inability to carry out the tasks entrusted to, causing a complete collapse in all services and a significant rise in food prices, especially in the capital, Aden.

President Al-Zubaidi listened to the plan of escalation, which the southern trade unions plan to adopt to overthrow the government, in order to save the country from the fall in poverty, chaos and mass collapse.

Al-Zubaidi praised the efforts of the southern unions in defending the interests and rights of workers in particular, and the whole society in general, to face the practices of corrupt and tampering with the country's capabilities.

The President of the Southern Transitional Council pointed out that the south is going through an exceptional and decisive period that affected the rights and the livelihood of the community, in which a lot of its people become below the line of poverty and destitution inline of enrichment of obscene forces of corruption, noting in this direction to the role of trade unions in leading the process of change and put an end to the practices of breeding and starvation practiced by the government, stressing on the value of southern trade unions in fulfilling their role and responsibilities in defending the rights of workers and citizens together.

Al-Zubaidi called on the unions to carry out the task of preserving and safeguarding the state institutions from any attempts of tampering and corruption as they are the property of the society.