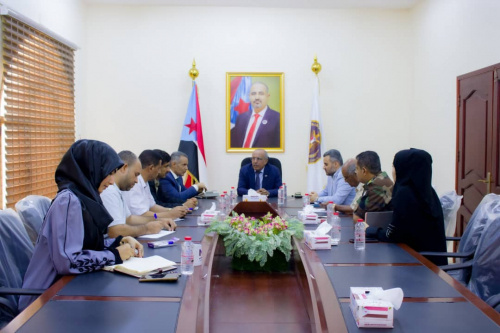 The National Southern Media Authority (NSMA) held its periodic meeting on Saturday at its headquarters in the capital, Aden, chaired by Mr. Ali Abdullah Al Kathiri, member of the Presidium of the Southern Transitional Council (STC) and head of NSMA.

In its meeting, NSMA lauded the grand success of the First Conference of Southern Journalists and Media Members (FCSJMM) at the local, regional, and international levels and the crucial outcomes that came out of the FCSJMM, foremost of which was the formation of the Syndicate of Southern Journalists and Media Members (SSJMM) and its headship, which is a step on the road to reclaiming all southern press and media institutions and protecting the rights and status of southern journalists and media members, and praised the exerted efforts of the Preparatory Committee in holding and bringing success to the FCSJMM.

In another context, and based on the decision of the Presidium of the STC, NSMA confirmed its refusal to hold the so-called Aden Winter Festival, which is to be held on Sunday.

As the STC's decision stressed the refusal to hold the so-called "Aden Winter" event, which is to be held by the Ministry of Information and for which the government has allocated millions of riyals, calling for directing such funds to activities that level up the reality of media, cultural, and tourism institutions and alleviate the distress of its affiliates who face difficult situations.

NSMA indicated that holding such festivals is within the power of the local authority in the capital, Aden, and its relevant offices, stressing that it would have been more appropriate for the Ministry of Information, Culture, and Tourism to work to reopen media institutions such as Aden Radio and Television and make efforts to pay attention to the employees in these institutions who face distress as a result of the difficult situation in the country.

The meeting discussed several topics related to the southern media and its institutions, as well as the performance of NSMA and its sectors, and took the appropriate measures.