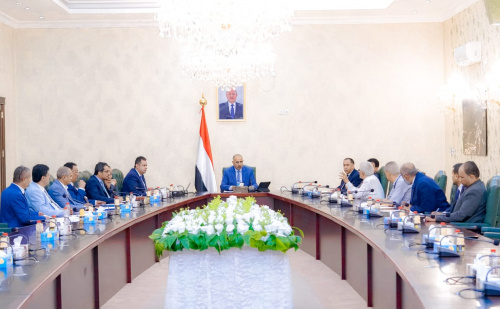 The Supreme Committee for Financial Resources held its first meeting at the Presidential Palace in Ma'asheq, headed by President Aidarous Qassem Al-Zubaidi, President of the Southern Transitional Council (STC), Deputy Head of the Presidential Leadership Council (PLC), and Chairman of the Committee.

The meeting, which was attended by Prime Minister Dr. Maeen Abdul-Malik Saeed, began by reviewing the decree of the PLC on the formation of the committee, the assigned tasks, jurisdictions, and the authorities granted to control and collect local and sovereign wealth fund revenues, rationalize expenditures, and develop and boost resources.

The president stressed the importance of obligately assuming the responsibilities and tasks within the framework of its work in the committee, intensifying efforts, and strengthening cooperation and coordination to achieve the goals for which the committee was formed, and that it would positively affect the lives of citizens.

The President, too, stressed the need to work according to a specific timetable working mechanism, a matrix of solutions and procedures to reform the revenue streams, and to strengthen the control process by activating the role of the Central Organization for Control and Auditing in the economic sectors to ensure boosting and developing available revenues.

After that, the meeting listened to the difficulties and obstacles that hinder the workflow of certain sectors, the most important of which is the issue of the governorates not supplying the central revenue to the Central Bank, and exemptions from taxes and customs that are granted in a flagrant breach of the law, in addition to a set of opinions and suggestions to solve it and provide fiscal sustainability.

The meeting approved assigning the Ministry of Finance to issue circulars and memos to the concerned authorities, regarding the commitment to collect and supply revenues to the Central Bank, follow up the level of implementation, and submit the evaders and lawbreakers to the committee to take legal disposition against them.