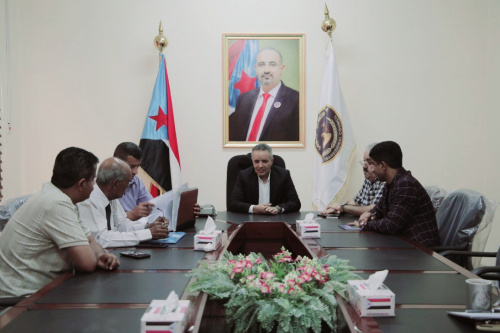 At the beginning of the meeting, Mr.

Mukhtar Al-Yafe'y, welcomed Mr. Basharaheel Hisham Basharaheel, Deputy Editor-in-Chief of Al-Ayyam newspaper, praying to Allah the Almighty to bestow His vast mercy on the late Hisham Bashraheel, the deceased of the southern press, referring to Al-Ayyam contributions in conveying the voice of the South since launching the first spark of the southern liberating revolution.

The meeting reviewed the latest developments on the southern landscape, and the role of the media of the South directly linked to these developments, the most important of which is associated with the military campaign "Arrows of the East", in coping up with victories and highlighting the danger of terrorist organizations that threaten international peace and security and how to contribute to eradicating such terrorist groups in partnership with the international community.

The meeting touched on the most prominent activities of the sectors of NSMA, and what has been achieved so far, evaluating the level of performance of these sectors and activities that have been implemented at the media and multimedia.

The meeting discussed the preparations to hold the Southern Journalists and Media Members Conference (SJMMC), preceded by reviewing and approving minutes of the previous meeting. It is worth to mentioning that the names of the preparatory committee for the conference are as follows:

and commence the first meeting of the committee on the next Sunday, September 18, 2022, at the headquarters of NSMA in al-Tawahi District, in the capital, Aden.