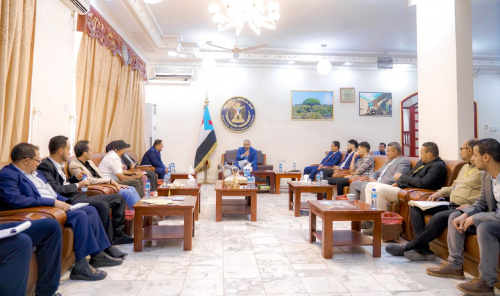 President Aidarous Qassem Al-Zubaidi, the president of the Southern Transitional Council (STC), Deputy head of the Presidential Leadership Council, on Sunday, at his office, in the STC's headquarters, in the capital Aden, received a number of heads of the Youth components and initiatives in the capital, Aden.

In the meeting, which was attended by Mr. Fadi Hasan Ba'oum, head of the Political Bureau of the Supreme Council of the Revolutionary Movement, President Al-Zubaidi highlighted that young people are the mainstay of the future and the pillar of the community for the aspired project of the state of the South.

The president, too, reaffirmed his permanent support to empower young people in all fields, expressing his readiness to provide whatever required assistance for all initiatives and programs aimed at qualifying and training them, polishing up their capabilities to use the innate potentialities and flextime for the their own benefit, and the interest of their communities and homeland.

Then the president listened to the attendees on the concerns and problems of the youth in the capital, Aden, and their aspirations for the future, in addition to reinforcing raised opinions, ideas and suggestions for youth initiatives aimed at consolidating their sports, cultural and social role.

To the end of the meeting, the attendees expressed their thanks and appreciation to the president Al-Zubaidi for his constant interest and full support for the youth, affirming their readiness to make maximum efforts to contribute to boosting the development wheel in the capital, Aden, and the South in general.

The meeting was attended by Mr. Amr Aqeel, head of the Cultural Department in the General Secretariat of the Presidency of the STC, and Mr. Al-Kraihi Kana'an, Deputy Head of the Youth and Student Department, too.