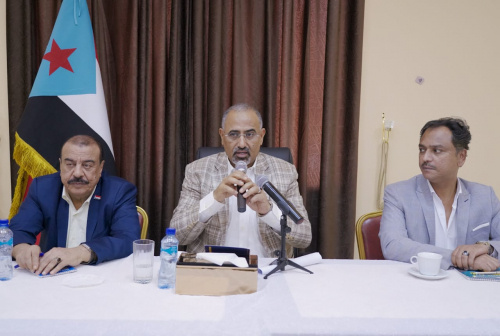 President Aidarous Qassem Al-Zubaidi, the president of the Southern Transitional Council (STC) and deputy head of the Presidential Leadership Council (PLC), on Monday, received in the Presidential Palace, in the capital, Aden, a delegation of Hadhramaut dignitaries, notables and social figures.

At the beginning of the meeting, the president welcomed all the attendees, appreciating their long journey to reach the capital, Aden, assuring that this reflects the high

patriotic sentiments, deep devotion to their just national cause, and keenness to enhance Southern cohesiveness and rapprochement, further to communicating the demands and concerns of the people of Hadhramaut, and discussing the possible solutions.

In the meeting, which was attended by Major General Ahmed Saeed Ben Brik, Chairman of the National Assembly of the STC, and Mr. Fadi Hasan Ba'oum, head of the Political Bureau of the Supreme Council of the Revolutionary Movement, President Al-Zubaidi lauded the ultimate sacrifices made by the people of Hadhramaut, in both Coast and Valley, in all the stages that the South has been going through since pre-independence, passing to independence in November 30, 1967, and their ongoing struggles in the Southern Liberating Revolution since 1994 to the present time.

In the context of his speech, the President praised the remarkable contributions of the people of Hadhramaut in laying the fundamentals of institutional work in the country of the South before 1990, and their prominent role in serving the national economy through large investments in projects of infrastructure, and their enrooted commercial activities since ancient times.

President Al-Zubaidi called on the people of Hadhramaut to reinforce cohesiveness, solidarity and rapprochement, to preserve the social fabric of the Hadhrami society, cooperate with governor Ben Madhi, and stand by his side to bury and thwart all hatched conspiracies against Hadramaut in particular and the South in general.

President Al-Zubaidi ended his speech on affirming that Hadhramaut has been and will always remain, the beating heart of the South, its strategic depth, centre of economic and social gravity, and its historical and civilizational legacy, and its people will surely have the final word in whatever concerns the administrative, military and security affairs of their governorate; in both the Coast and the Valley of Hadhramout.

After that, President Al-Zubaidi listened, from several dignitaries and notables, to a brief explanation of the overall situation in Hadhramaut in general, and the Valley districts in particular, in addition to certain issues, demands, troubles and concerns that encountering the people of the governorate and possible ways to get the right solutions, as the president assured what has been proposed will definitely be focused upon by the leadership, promising to pay a visit to Hadramawt in the upcoming period to closely inspect the troubles encountering the people of the governorate and to rightly get the required solutions.

For their part, the attended dignitaries, notables and social figures of Hadhramaut have blessed the positions and endeavours of President Aidarous Al-Zubaidi, and the head of the Political Bureau of the Revolutionary Movement Council, Fadi Hasan Ba'oum, to fulfill southern reconciliation and tolerance, calling on the rest of the southern components to respond to President Al-Zubaidi’s sincere call for rapprochement and cohesiveness to serve the people of the South and achieve their aspirations.

To the end of the meeting, the attendees expressed their thanks and appreciation for the special attention given by President Al-Zubaidi to Hadhramaut Governorate, and his continuous support to empower its people and and enable them to acquire the accrued-right to manage all the affairs of their governorate. 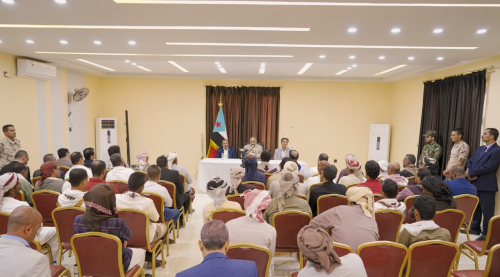 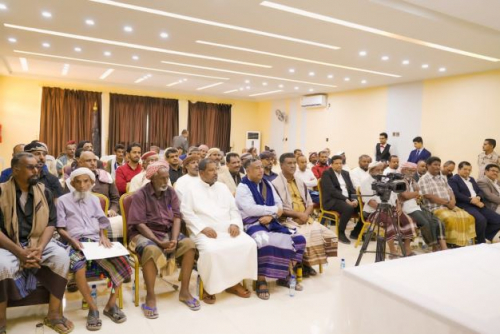 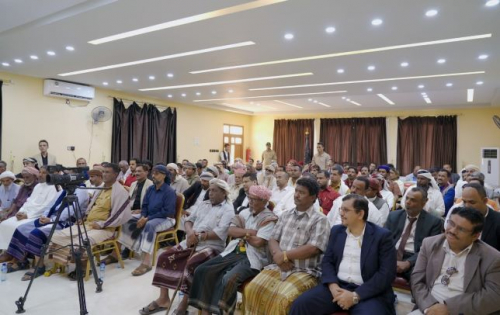