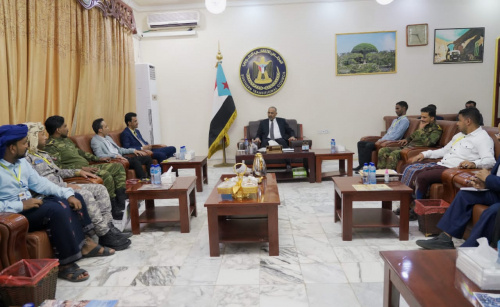 President Al-Zubaidi listened from the deputy governor and the officers to a brief explanation on the latest developments in all districts of Hadhramout and the role of the young officers in maintaining stability and security in police stations, police departments and the various security service in the governorate.

The president stressed the importance of empowering the youth graduated from the Security and Military Colleges as per their specializations in maintaining security, combating crimes, and

eliminating alien phenomena seeping away into our societies, norms and traditions, assuring that the Presidential Leadership Council is keen to empower young people to play a major role in the upcoming stage.

In turn, the deputy governor Al-Gailani and the accompanying officers expressed their gratitude and appreciation for the high support provided by President Al-Zubaidi to young people in all governorates of the South, in addition to his supportive attitudes in assisting and encouraging their competences, affirming their support, cooperation, and assistance to the president in all the steps he takes to achieve triumph to the South and its just national cause, until culminating in complete independence.

The meeting was attended by Mr. Marwan Al-Hamoumi, member of the National Assembly of the STC.