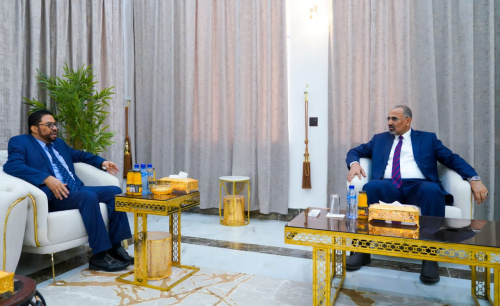 The president Aidarous Qassem Al-Zubaidi, President of the Southern Transitional Council (STC), Deputy head of the Presidential Leadership Council (PLC), stressed the importance of upgrading and developing the official media performance, broadcasting, and publishing to keep up with the rapid changes in the field of media and information technology.

It took place when the president Al-Zubaidi, on Wednesday, met with Mr. Hussein Ba-Saleem, Deputy Minister of Information, who briefed him on the reality of the official media and the efforts made to re-open media institutions affiliated with the ministry, upkeeping its premises and supply with modern equipment, to start in the work from the capital, Aden.

The president reiterated the importance of returning all official media; audio-visual, and print to work from the capital, Aden, foremost of which is Aden Radio and Television, in the same context called on the leadership of the Ministry to exert high efforts to resume the work of the Ministry and its offices in all the governorates and to assume the responsibility at all levels.

For his part, Mr. Hussein Ba-Saleem expressed his gratitude and appreciation to President Al-Zubaidi, his incessant support for the Ministry of Information and its affiliated institutions, and immediate response to the Ministry to overcome encountered difficulties.